Don't forget the vintage bikers ...... Lindsay, Johnj and Marc (as a team) and Karzie and Alister as individual racers, and maybe Toff (?). We're all all riding vintage steel bikes.
Top

I've entered, I'll keep an eye out for the red jerseys. I'll defiantly be looking to share the load somehow.
Top

Myself and Bradley and he's nominated a 40kph speed, way out of my league.

Now my old legs and I are feeling really worried.
Top

I was thinking about entering but then id have to race in the same category as Bradley and its way to early in the season for that.
Top

That list hasn't been updated since the 5th April and doesn't include me. I've entered the 35-40kph group
Top

I'm in for the 110km. Just made the cut off time as finding accommodation was a killer! Nominated 30-35km due to been pretty sick the last few weeks and lost a bit of weight.

Also entered the hillclimbing champs but no criterium.
Top

I think there were 17 DHBC riders doing B2B today.

I was pretty pleased with my ride in the Extreme which was supposed to be 162km but ended up being 145km because we all got diverted around a nasty crash on the last big hill. Which made the last bit fast and flat. There seemed to be alot of crashes, I don't know why and the only water stop at the 100km mark had run out of water. So had I so I had to wait which was a bit annoying.

Phillip and I started together, the only 2 DHBC starters after Mike withdrew and then he just took off after 5km and did a faster ride than me overall. I found a few people to draft behind now and then, including one bloke who was setting a fair pace, jumped in behind him and perhaps maybe I displaced his wife. Oops

Anyway he had to go back after a while and find her.

After Blayney I started to catch up with the slower 110km course riders and pass them one by one. Good for morale, not so good because they were all too slow to draft. A couple of blokes suggested points for a hill climb. Beat em both

It was a good ride overall and I'd do the Extreme version again.
Top

Sorry Eleri, I did take off quite early in the piece. My plan was to treat the first 50km loop like a warm up and go easy. So much for that plan, those Oatley blokes rode by and their wheels were just too tempting. I stayed with them for the first 60-70 km, thanks guys. The good thing about going harder early on was I timed it to meet up with a lot of good riders doing the 110km route. Thanks also to the St Huberts club and to two other groups who's names I can't remember. I'm very grateful to them all for dragging me around the course.

I was already part the way up Rockley Mount when the lead riders started to come back down after being turned around. I chose to keep going up as far as I could. I really wanted to clock up 160 km, my longest ride to date. I listed my self as doing between 25-30kph and was hoping to get close to 30kph. I did the 160 at an average of 132.1 kph, I was thrilled.

Great ride and beautiful route, I do love autumn, and I'll be back next year.
Top

which was supposed to be 162km but ended up being 145km because we all got diverted around a nasty crash on the last big hill.

Yes i saw the end of that crash. Nasty stuff. The group I was in was very close to running through it. Fortunately a few spectators ran up the decent to warn riders coming through. We were travelling at about 80km/hr through that section so to have a crash there was not good. One of the three riders involved was sitting up albeit with quite a lot of blood on the face and arms/legs.

My observation was that there were quite a lot of inexperienced riders who thought they could sustain a faster pace with a gross lack of bunch riding skills. There were some outright stupid things people were doing, putting other riders at risk. Fingers crossed all DH riders made it home safe and happy!

On a positive note, I did end up finishing without crashing (i did get very close at the 10km mark though) with a respectable time too. I finished 10th out of approx 180 riders for the 2nd wave (35-40km/hr) on the 110km ride and finished with a PB!
Top

I left with the last bunch in the 70k option. We met Paul and Margo on the start line, Paul wasn't riding as he was having a sickie.

On the first corner as you left town there was a ambulance in the middle of the road and a rider down in front of it. It looked like he had done his right collarbone, I'm guessing.

My primary concern was about a beginner rider taking out Paulette, but it wasn't a concern, it was like riding with commuters. Jono, who you will remember moving to Canberra was at the side of the road, so I stopped to see what the problem was, which he had just fixed. I took advantage of the open road between me and my rider to sit in low 40's and test out my rib catching her up. I did this in a couple of other places for some more evaluation.

What I really noticed was that the first section, which was shared between the 110 and 70 routes was a lot hillier than I remembered from doing the 110 route in 2009, I had expected the 70k route to be like riding to Waterfall but it was. Paulette powered over some hills and died on others, as what I saw in the other riders around us.

About half way Jono caught us and sailed by, but a bit further down the road we came upon Margo, who was looking rather [too] warm in her raincoat, I had one on at the start, but took it off at the last moment, deciding we would ride out of the rain.

On the flat section thru Pentville, I went on the front and paced Paulette and she sat comfortably in low 30's, despite the work she had already done. Then those last 2 hills in Bathurst confronted her, she was about to get off on the first one, but I gave her spin room style encouragement and she made it. Only the one after the tunnel, a little ankle snapper, I thought she was going to run out of gears, but she got up, an impressive achievement.

Then we went to the pub with the retro riders

I'll post some pictures later, got to go back to the gym now, I left my Ipod player there this morning
Top

I would be thrilled with that average too.
Top

Here's what I could extract from the preliminary results (testing the limits of my spreadsheet skills). Apologies if I missed anyone, or made a mistake, etc.

I know it isn't all about results, but for those interested, I added a column for age & overall placing in the particular course a rider was in.

Here's what I could extract from the preliminary results (testing the limits of my spreadsheet skills).


Very cool and made even more difficult by the fact not every one did the same course. Some did Rockley, some did part of Rockley and some missed
Rockley altogether. Hats off to your spreadsheet skills though, I don't know one end of a spread sheet from the other. Hats off also to everyone who
did the course.
Top

I know Simon made it over Rockley, and assume Bradley did too - I was looking forward to finishing the climb (I had finally bridged a bunch I'd been chasing), but given the circumstances, it wasn't an issue.

But yes, the times for the 110/170 are skewed depending on your turn point... I found it was quite a tangle at the end with a whole lot of riders/skills coming together suddenly after the turn-back.
Top

I assumed Bradley made it over before the crash, which makes it an awesome time for him, I can only dream of that speed..

though I'll first start dreaming of your speed, also awesome, so watch your back young fella.

I missed most of the chaos as I was one of the last group to head up Rockley before they shut it down.
Top

Owing to a few minor technical issues* Marc, Toff and myself didn't make it to Blayney for registration till 9am. By this time they'd run out of transponders. After sorting out registration and meeting up with Alister and Lindsay, it was a flurry of bikes and wheels flung out the back of the wagon, swearing and general faffing around. Bikes assembled, we took a quick spin to make sure nothing would immediately fall off. Toff and Alister took off with a faster wave, while Adam, Marc, Lindsay and me went with the 25-30 km/h riders. Adam took off after a few ks and Marc stayed with us until somewhere after Hobby's Yards. A bit of drizzle after that, but only enough to cool us down. Lindsay waited for me at Trunkey Creek and again on the climb out, when I stopped to eat and have a drink. While stopped we were passed by Eleri, who looked fresher than I felt. We met Eleri again at the drink stop where I ate the last of my food (all the food there was gone). The descent from there was huge fun and great to watch Lindsay in his best aero tuck position, ringing the bell as he passed occasional spectators. Not so much fun seeing the occasional crashed/collapsed rider or the ambulances though.

It was a pretty gentle amble from Georges Plains to Perthville. We were joined there by the 70k riders; their speed was mostly greater than their bunch riding abilities. Lindsay and I crossed the line together, at 3:53, just shy of a 25 km/h average, which we were both delighted with. A quick trip to Blayney on the bus to collect the wagon and I met everyone back at the pub. Then the Chinese puzzle of fitting 3 bikes and 5 people and their gear in the wagon. Pizza in Katoomba on the way back and then I fell asleep watching Liege Bastogne Liege.

Summary:
Good stuff: Good company, lovely scenery, mostly well-behaved motorists, mostly good organisation, no flats or mechanicals, excellent weather (cool, cloudy, not much wind, only a few showers), friendly riders, plenty of locals out at their front gates spectating.
Bad stuff: Some very dodgy group riding, too many crashes, lack of food (and water for some people) at the top of the range.

Quotes of the day:
"Free kilometers!!" (Lindsay at the bottom of a big descent)
"Zis ees better than winning!" (the German dude with his bike who managed to flag down the Blayney bus just before it left Mt Panorama)
"I'm really hungry, can we stop and get something to eat?" (Toff, periodically)
"How do I choose a good vintage bike to buy?" (Alister, unwittingly releasing a useless 2-hour torrent of contradictory advice) 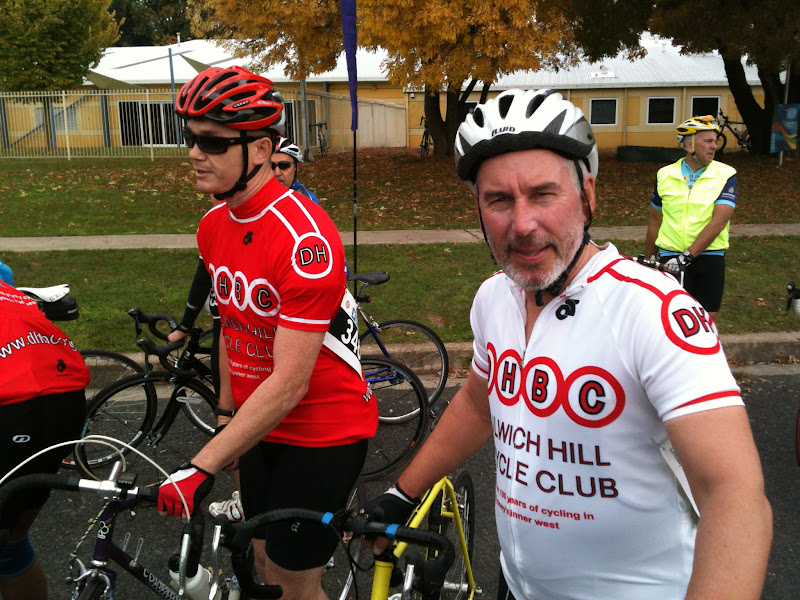 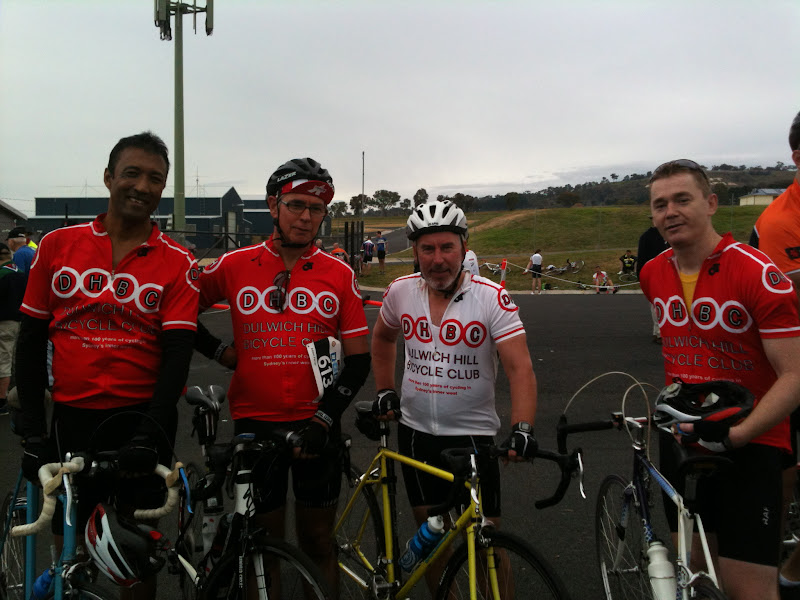 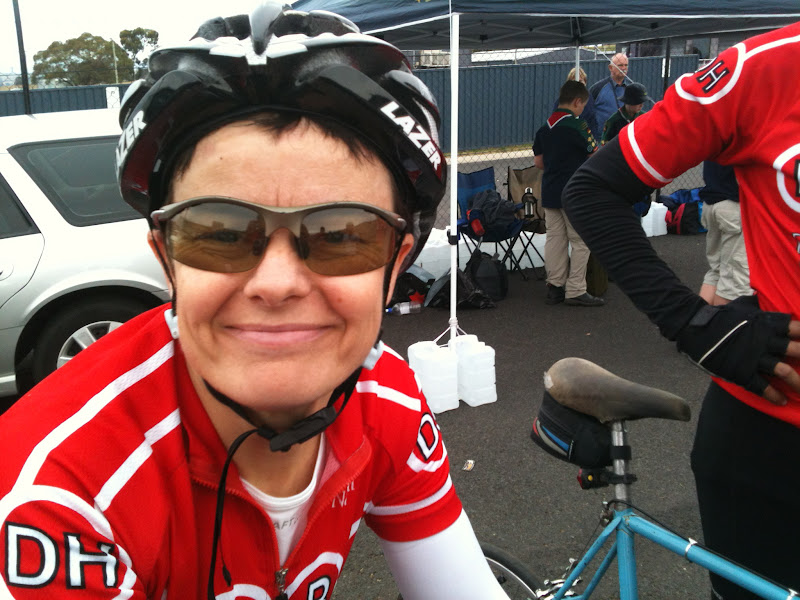 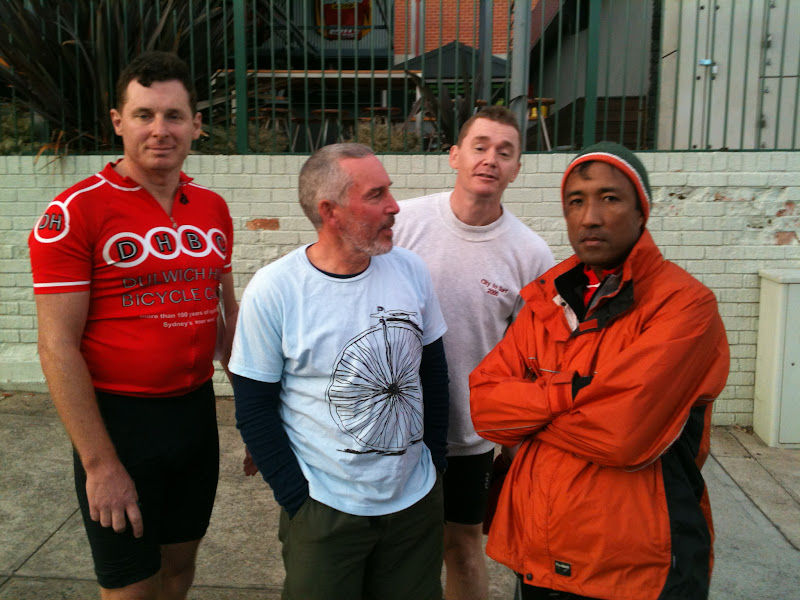 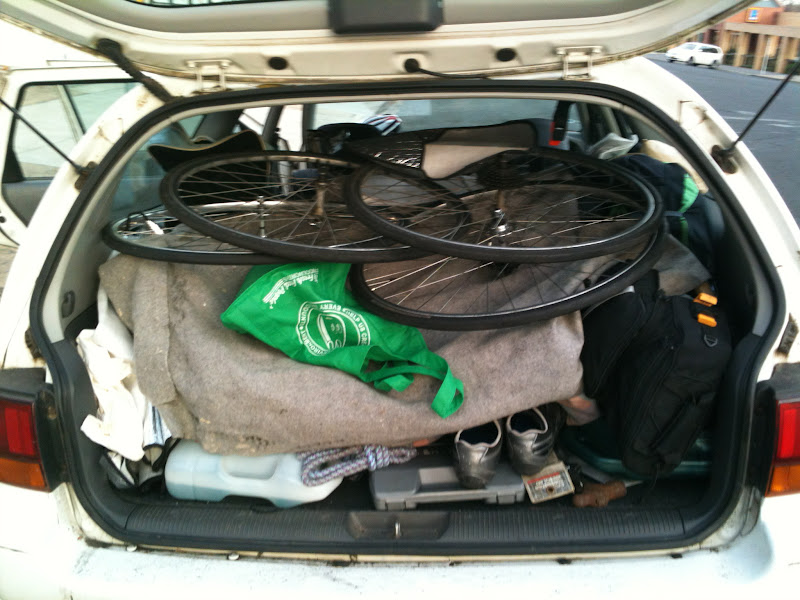 Overall was a great ride. Am still very new to this whole scene and was my first time, so it was a great learning experience. Will probably not attempt to arrive on the morning of the start, better to stay overnight at a hotel. Lindsay and John were great company for the first part of the run. Only problem was the refreshing station located on Trunkey Rd ran out of water and I had finished my supply. Annoying.
Top

I appear to have won my (women's) age group!
Top

Users browsing this forum: No registered users and 7 guests