Hotel booked for 17 people plus a few kids. There are still places available if anyone else wants to come just ring up and add yourself to the booking under my name and do the same for dinner.

Dinner: booking is at 6:30pm - booked for everyone under my booking which is 17 plus a few kids.

Breakfast: is booked for 7am at Ye Old Bike Shop. If you have not placed your order in the above thread you will not be eating. They can add to our order so let me know asap if you are yet to order or are an additional starter.
Top

Sorry Simon, forgot the other driver...

I was thinking,
jump on the train @ 9:38 from wolli creek, transfer at campbelltown and head to bowral. arrive @ 11:40, go to the pub for lunch.
then ride out to Bundanoon, via the newly re-surfaced velodrome!

I'm keen to do the train to Bowral.

I would lean towards 1108 departure for late lunch at Bowral and pleasant mid-afternoon fixie-style trundle to Bundanoon.
Andrew
Top

hey
thanks Andrew, I'm not sure where i was looking, or if trackwork had anything to do with the times being off...
but i concur option B, and that gives a good sleep in after the BFF goldsprints friday night
Top

131500.info appear to have rail replacement buses on the Saturday.

I am planning to leave Wolli Creek on the 3:08pm, to arrive Moss Vale at 5:23pm. An easy 18k's and should arrive at 6:10pm or so at the latest. Anyone else interested in the later train?
Top

I would lean towards 1108 departure for late lunch at Bowral and pleasant mid-afternoon fixie-style trundle to Bundanoon.
Andrew

I'm tentatively in for the 11:08 from Wolli Creek. I'll confirm later in the week.

If anyone's interested in joining me. My current plan seems to be leaving Marrickville at around 9:30 (knowing me, it'll probably end up being closer to 10), and meet everyone in Bowral for lunch.
Top

I'll jump on that train too.
Top

Just a reminder to all riders, make sure your bike has new a good functioning brakes with good amounts of rubber on the brake pads. Please check chain tensions & if chains need replaced do it before the day.

Safety is paramount, last year we were abit relaxed and had a very serious accident, I don't want to see any crashes due to mechanical incidents which can be prevented,
Top

If anyone would like any assistance with their bike, eg can't find the right tool etc. or for some other sort of help, send me a PM, I should be able to help tonight, I have most of my bike tools up on a board now [/gloat]

While I'll still be in Bundanoon it's unlikely I'll be riding on Sunday and if I do, it will probably not be the full distance. I've been attacked by a stomach bug that may or may not be this...

It's still working it's way out of my system but am in a very weakened state as a result.

And I'm so disappointed as was confident of making it this year!
Top

that totally sucks Jo,
can i drop my bag off @ your place about 10 ish?
Top

We need to see those Golden Wheels flashing down MacQuarie Pass!
Top

Sorry to hear you are sick Jo. I feel for you. Last year I couldn't hold anything solid in, and missed breakfast before the ride. I still made it to Wollongong, so don't give up hope yet...

See you all tomorrow.
Top

Good luck everyone! Safe riding and have a great time.
Top

Thanks for that Eleri - your blessing worked fine!

Such a great day out on a single gear. Lots of stories, and terrific company. Sure was good to get to the velodrome though and then onto the German for a sit down on a soft chair.

We were well looked after by Ye Olde Bike Shop in Bundanoon and here is a pic of the early start breakfast.

Thanks to all who made it happen especially Simon and the team car that was everywhere on the route driven by Christian.

For those interested, here's some data on the ride;
http://connect.garmin.com/activity/235485164

and here's the data from the Bowral to Bundanoon scenic ride on Saturday;
http://connect.garmin.com/activity/235485195
Top

Well, I had a great time too, though my total was about 145km, not quite a century. However my bike is 60 years old, which combined with my age is a (different kind of) century…

I broke a tooth on Saturday, so eating was a bit of a challenge. My total for the day was two pieces of toast, two apple turnovers, a few of Tim's unwanted wedges and a piece of muesli bar. Spare a thought for AndrewB, who was really sick and survived on an ice-cream and a muesli bar….

As to the ride, beautiful weather, with a tail wind for a lot of the distance. The descent of Macquarie Pass went on and on…. I got to the very last corner and my front tyre went BANG. Managed to stay upright and stopped at the bottom, to discover that the rims had overheated causing the failure. My brake pads were also cooked. While I was changing it one of Adrian's tyres also detonated (same cause I think).

After lunch at Wollongong I survived until the first slight uphill, then dropped out of the pack like a stone. I trundled along until Coledale, where I waited for a train. Pete and Andrew were on the train and we all decided to get off at Waterfall. Over the Captain Cook Bridge and a quick-ish trip to Tempe via the back streets.

Highlights:
Sampling some local wine at Bundanoon, and discovering why the Southern Highlands is not rated one of the world's great wine regions.
Watching Toff nearly (but not quite) succeed in eating a second breakfast immediately after his first. Apparently this is a feat only possible for a hobbit.
Seeing Christian waving the floor pump as I was changing my tyre.
Watching the expressions on people's faces as Toff injected his preferred PEDs.
Barrelling down part of the Ken Dinnerville route, which was nearly rough enough to be pavé.
Seeing the look on Pete and Andrew's faces as I walked my bike through the carriage to where they were sitting.
Getting out at Waterfall and discovering there was a tail wind to blow us home.

What I learned:
That I need to do more training.
That training (i.e. riding in a train) is easy.
That steel rims and lots of braking are a bad combination. 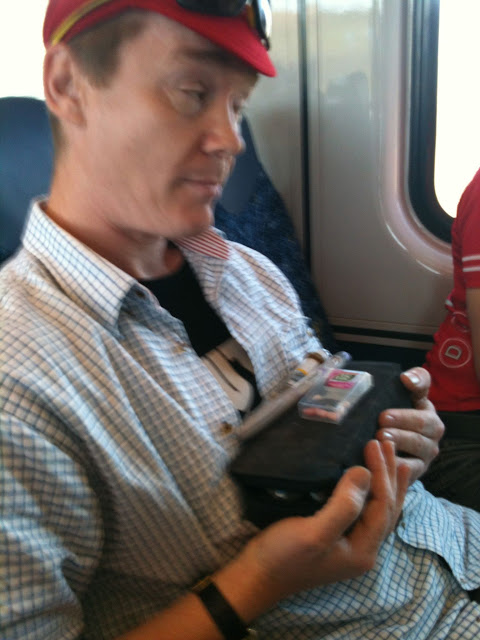 Glad to be finished. 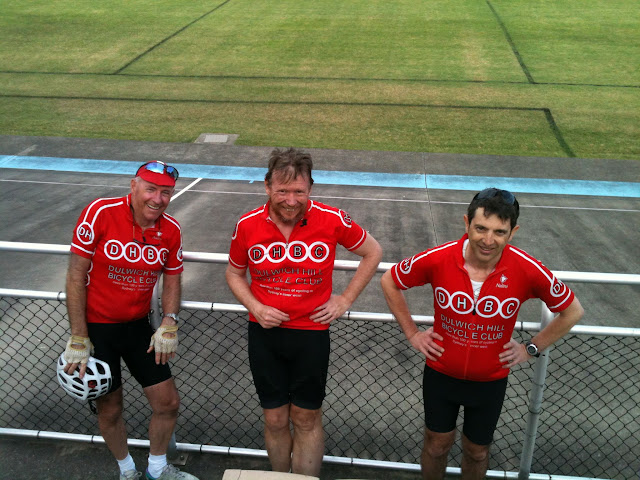 Ah the winners were those who enjoyed their weekend
Top