On the weekend I was inspired by the diversity of the classic bike show and then last night Jeremy came riding past my house on a spanking new custom built bike with a combination of old and new parts. I was puzzled why he would create such a beautiful piece of machinery for commuting and whilst I am still confused, he oozed pride and my wife convinced me that commuting is all about the passion of cycling and having fun.

I want to see what other bikes people are most passionate about as whilst in my mind this cycling is all about racing it seems that too others this is truly not the case.

So here's the rules:
1. Since I don't believe there is any exact definition of commuting as it is simply going from one place to another, all bicycles are eligible.
2. The winners will go to the three people who most passionately present their bikes
3. I will appoint a guest Judge; Lindsay Munks (who I haven't told yet but I'm sure he will be happy to)
4. All entries should be posted on either this thread or on the DHBC Racing Facebook page, competition ends and no entries will be received later than the 25th April 2013.

It's a Le Roche Reynolds 531 steel framed Tamdem. It takes us places and we have a lots of fun. It's best features are the YEp baby seat which is very user friendly and practical. The bike is very comfortable due to it's long wheel base and also has the capacity to carry an extra passenger.
Top

I was inspired to add to this celebration of utilitarian cycles by the pride and wonder demonstrated over the weekend at the Classic Bike Show.

This is my everyday basic commuting bike, its a Reynolds 531 double top tube road frame, I was told it was perhaps built by Calypso Cycles in Sydney although I bought it as a bare frame in Hobart. It is a very comfortable and responsive bike, it gives you a great presence on the road to encourage motorists to share the road.

It's built up with parts that were ordered or taken from the spare parts box at work. Apart from the frame itself which I love (68cm!) the best part is the SON Edelux LED lamp + SONdelux dynamo hub which I built up with a mavic open pro rim. This light got my into long distance night riding, and served my happily during the Dunwich Dynamo and Newcastle Overnight.

The rear wheel is a older shimano 600 hub also built to an open pro and running an extra wide 11-36t 9 speed cassette. A Deore LX derailleur is run off a single bar end shifter for a great wide range 1x9 set up. The saddle is a Brooks I found on a early 1970's Dawes Touring bike in a skip behind Sydney University, it has had a good life and the lacing vaguely holds it together. Other bits are a Crane Brass bell, beautiful Shimano R-650 long drop brake calipers and SKS mudguards.

One day, when I spend more time working and less time riding, I will build up a translucent light box to fit inside the top tubes to advertise my shop.

I just love my commuting bikes life story.
It started out as a standard stock Cell Swift (9 speed Tiagra equipped) bike that was my start into road cycling.
Once it dawned on me that instead of spending an hour each way in a 1500kg car being moved, it would be far better that I spent that same time riding and moving a 10kg (or so) bike, the question was how to adapt the bike to become a commuter.

Now it's pretty Frankenstein-ed, built from new and spare parts and, in my opinion, pretty unique.

Wheels : One of the first changes were the wheels - it went from R500 with 23mm to some racing wheels (you'll be surprised to hear Campagnolos 9 speed cassette works fine in an otherwise Shimano 9 speed drivetrain with virtually no tuning) but eventually back to R500 with 28mm tires .
Although the 28mm tires pretty much means I can't fit mudguards they provide an extremely comfortable ride.

Brakes were the next to be upgraded to Ultegras once I found lack of braking power a concern during a rainy ride.
The drive train was upgraded about the same time with Ultegra RD and cassettes, Chainrings were changed to Stronglights 51T/38T and also when I became a big fan of KMC chains and quicklinks.

Up to this stage I was commuting with a backback and looking for alternatives when I came across the Carradice SQR Slim which fits my needs perfectly : Quick Release saddle bag, able to stuff a whole laptop if I needed to into it.
Capacity pictures
QR speed test pictures
I changed the seatpost and saddle as well at the same time.

Then disaster struck ... the LH shifter died on me - and that is when I found that Campagnolo 11speed shifters would work perfectly fine in conjunction with Shimano 9-Speed drivetrain! Just absolutely brilliant! I have what is called ShimErgo system - and yes, it multiple shifts,up and down, wonderfully.

Along the way I've had multiple bartape, chains and cable changes too.
At this point of time the only things original are the frame, headset, stem, handlebar, fork, wheelset, FD and cranks.

Well, enough talk, here are 2 pics of my precious commuter , Sunflower (probably as a result of too much Plants vs Zombies )
- precious enough to the point that I declined to let my son use it for his junior road camp.

Thanks for the replies, I really enjoy reading the personal stories of other peoples bikes, there is so much wealth of Character.

James; I've forwarded your questions to the distributor & i'm sure they will only be too happy to supply you with more information, the pamphlet is very limited. They are very passionate about their product & supporting cycling.
Top

Judge this, judge that... You know I nearly died from over judging on Saturday!

Anyway here's my commuter. It also doubles as my tourer. It's a badged up Blackman which is really a Kuwahara. She's done the fixie century thrice & thrice laps of Tassie. Ridden a Xmas heatwave in Central NSW and 2012 Blayney to Bathurst.

Right hand crank is a Super Maxy. The left crank is a Mistral by Ofmega (a mistral being a cold wind in France) which I scored one night at Tempe when Michael Clements pulled the pedal out of the right one and subsequently bit the concrete breaking either his hand or ribs (or both?). There was coincidentally a cold wind blowing that night as well.

Most sacred are her Shimano 600 Arabesque downtube shifters powering 1st gen Deore Derailleurs with the rear having a wiggly lever thing that does I don't know what. 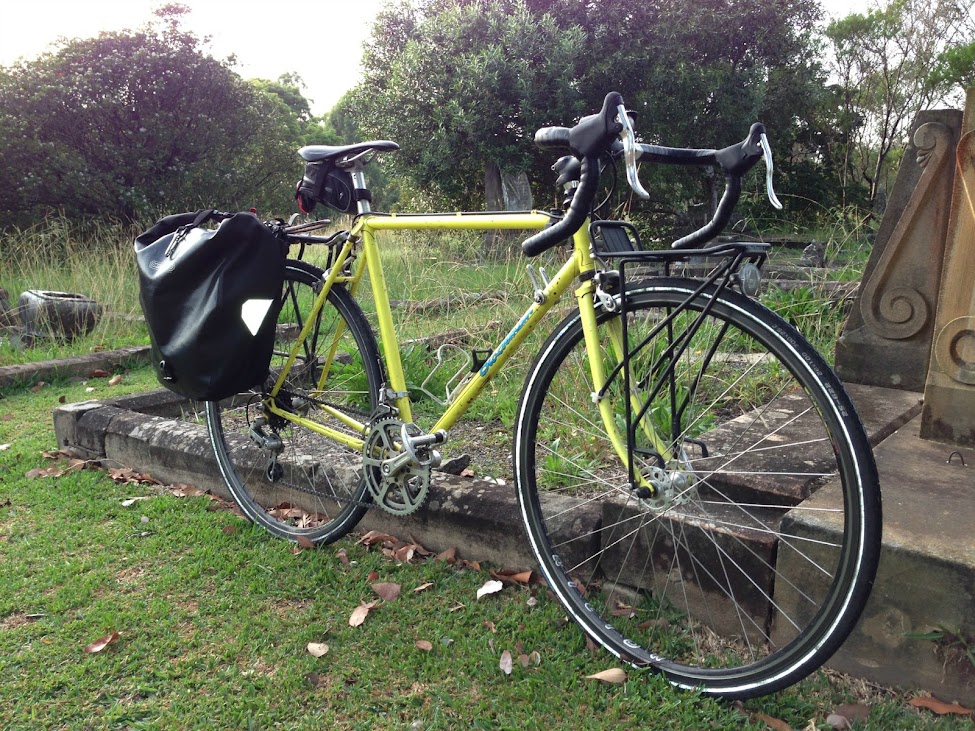 Here's me in Tassie waiting for something to judge. 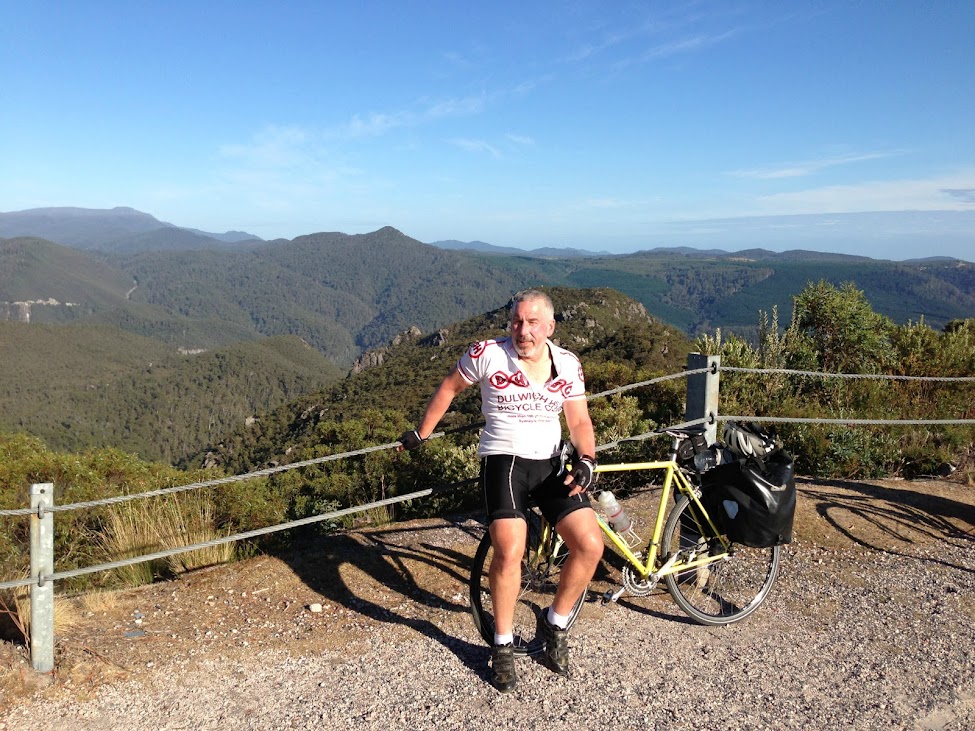 I know it is a bit of overkill, with the bike show on the weekend but then ......

My commuter is a mid 80s Bob Jackson Super Tourist. UK made bikes from Leicester. Very popular over there and in the US. Bought it off Andy, a fellow bike collector, in August 2012 for $60. He in turn bought it for $60 from some guy from Cronulla who had no idea of its real worth. Anyway my friend stripped the bike of its sort after Shimano 'arabesque' styled groupset to sell on ebay. I bought the stripped frame off him and went straight back to ebay to rebuy similar parts (but not from him).
Lovely bike, slightly large for me (62cm). I usually ride a 60cm. Another problem, probably due to the fact that it lived on the coast, is that the stem is rusted solid into the headtube. Will not budge. Even tried nitrogen-like/freeze spray! That explains the strange angle of the bars. I needed it a bit higher because I was stretched out too far.

Not only used as a commuter to work and back but a shopping transport as well. Occasionally use the kids 'Kiddie Carrier' to carry large loads of shopping.

Baby blue with chrome highlights. This thing claims to have a track geometry. All I know that it's sweet to ride, the chromo is heavy but fun. Bought for $300 off a guy in St Ives, he had a long MTB bar on her. That lasted one ride before I swapped it out for the original bull-horns he helpfully supplied. Next to go were the BMX style brake levers - too hard to reach in an emergency, the replacement TT levers (not pictured) are much better. Currently running 48x18t fixed. Only other 'feature' is a flat spot in the steering, which I kinda like. The front wheel always seems to jump back to centre. Gone is the saddle-bag and tyres are now a matching blue (not much of a selection at the LBS - it was blue or yellow). 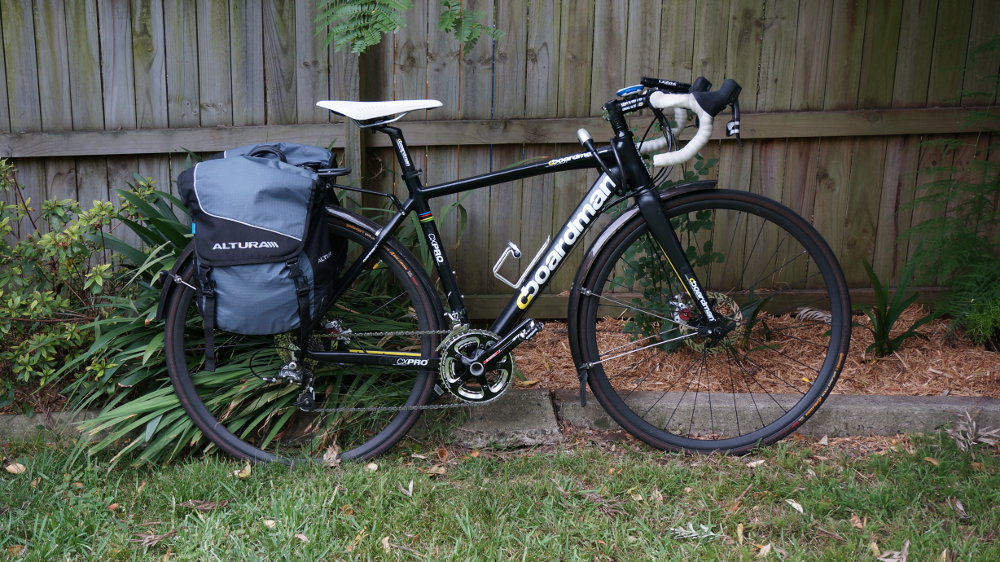 CX commuter with loaded panniers ready for a ride in the rain.
Top

marc2131 wrote:Another problem, probably due to the fact that it lived on the coast, is that the stem is rusted solid into the headtube. Will not budge. Even tried nitrogen-like/freeze spray! That explains the strange angle of the bars. I needed it a bit higher because I was stretched out too far.

It doesn't sound like you've quite tried everything to get that stem out. Watch this whenever you've got some free time and a strong heart.
Top

Updated !
with mudguards and tubeless tires.

Has Lindsay finished judging yet?

Users browsing this forum: No registered users and 1 guest