Dougie, as Eleri said, your first ride will be with novices.
Warm up (on the track, own time, own target and optional) is between 630 to 7pm
Races proper start from 7pm, moving from div5, 4,3,2,1 then Novices each time.
So , if time is tight, the latest you want to get there is no later than 7 to get signed on, and warned up ( rollers, mini track) and have a look at the divs do their races.

The races are generally, a warm up scratch, a sprint sort, an enduro sort, and a combines (which the novices don't ride) , again , if time is a concern,the novices last race will probably end 845 or so.

These weeks, novices have about 5 or so riders so it's quite gentle.
Top

Also, there will be no novices race on the last night - 13 September
Top

Mmmm you don't really need to ride novice first time, at least I didn't. Might be a bit of a waste since you have raced bowral... Have you ridden at dunc before ? If so I'd say at least go in div 5.
Top

I have the leave pass all sorted. RAW here I come. Do novices get points toward the Club Challenge?
Top

Yes Dougie. You get at least 10 points for attending and if you ride Div 5 and place you'll receive additional points for that.
Top

I'll also be there in novice, I've ridden at tempe before but never DGV and I've never raced track before so I think that puts me squarely in novice

Anyone know if tears are vegan?
Top

I don't know if I will actually make it back this season, I seem to be working most Fridays now
Top

I don't know if I will actually make it back this season, I seem to be working most Fridays now

This is neck and neck! Wish I was there ... Alex must be assembling the team about now.
Top

Our team's up on the RAW forums, where's yours?
Top

Our team's up on the RAW forums, where's yours?

We're like the Liberal party... Leaving our budget strategy until the last minute.
Top

Im still waiting for a message back from the new PM to see if he will ride in our team.
Top

Can't ride velodrome - too much turning to the left.

So here's the team then. I did look at parachuting Pat Noble in to race, but given that he hasn't raced at all this season I didn't think that was acceptable.

Can't ride velodrome - too much turning to the left.

So this Friday is the last night right? If you're not in the Italian pursuit team do you actually get to race or do we just go to watch?
Top

Friday night is the last night. All the normal racing is on, the Italian is just an extra race.
Top

Guys,
Regardless of the outcome of tonight's ride, I would like to thank you for a wonderful contest. I think it's been a benefit to both clubs.

And we still love you

BFV, without doubt the highlight of the RAW season has been the .gifs each week.
Top

We won the race!
We also won the cheering. Pete was quite good on cowbell. Karzie got some great photos.Tim is a good barman.
So good work all round.
Top

Great work everyone! Especially those who rode in Italian Pursuit and I'm looking forward to reading a race report. From every one of you!

Thanks too to Alex for pulling the winning team together. You've all done us proud.
Top

I didn't realise it was number 5 until I lined up the medals early this morning.
Top

Fantastic result for the club. Big thanks to everybody who rode this year and to those who raced the final.
Top

How would Sir Dave Brailsford choose a team for an Italian Pursuit? For you hipsters who aren't aware of cycling outside of fixies, Dave is the general manager of Team Sky (the team in the Rapha jerseys) and is famous for a scientific approach to cycling that produces performances that rival those of cycling teams in the 90s.

When it comes to choosing a team, I'm sure Sir Dave would have a very detailed spreadsheet detailing every combination of riders on the roster and all of their statistics. He would also have this information for the rival teams and he would have the race planned out on paper long before it was ever raced. This has proven to be a successful formula for both Sky and British cycling, producing two yellow jerseys and multiple Olympic golds.

LACC has its very own Sir Dave in Stelio Pappas. Stelio had the complete roster of all LACC riders who had raced at RAW this year and he had an amazing spreadsheet of team possibilities. It was colour coded and automated and Stelio generated what, according to the numbers, was a team that could beat Dulwich Hill. The team consisted of two of the fastest masters women road racers in the state (that's not hyperbole, the podiums at the NSW Masters champioships last weekend featured LACC women galore), two members of the Cellarbrations Racing Team squad, and a recent pro rider. According to Stel and his spreadsheet, this team was faster than anything Dulwich Hill could put together.

Come the final night at RAW, with all of the team there, spirits were high. Stel called a riders meeting, pulled out his phone (with the spreadsheet on it), and showed everyone how we were going to win. Everyone saw the colour coding and saw that it was good. And then one of our road champions asked what the rules for an Italian pursuit were. The race was explained. Then someone said "fence start?"

What Stel's spreadsheet didn't have in it was the team factor. Dulwich Hill, seeing our team posted early and knowing they were inferior, spent time practicing their pursuits. It was this that got them the win. We had the strongest riders, but we didn't have a team. When the whistle blew and the Dulwich Hill team dropped into the sprinters lane...well, it was sort of like watching a 10 person human centipede; LACC's start was like watching a blind guy playing Tetris.

The only way LACC could win was with superior speed, and that speed was shown with the gap caused by the poor start being clawed back lap by lap. It wasn't enough, however, and Dulwich Hill won by virtue of their well practiced pursuiting and adequate speed. Well done, Dulwich Hill.

I will conclude this report by serving notice that we will be up there again next year and we will win. Our road champions have been blooded; they're not used to losing. Our new velodrome is almost complete, so we will be practicing. Enjoy your bike, Dulwich Hill, it's the last one you'll win.
Top

Hey! I didn't think anyone had detected our secret italian pursuit training. We need to tighten the security at Tempe big time.
Zanzi did a great job of the start. Dancing around a lot but giving it everything and finishing fast. We already seemed to have a solid lead after her two laps. Riding second (and feeling so honoured to be in the team) I started to bounce around too as I tried to push too hard, but then I was already swinging up and out - still with a good lead on LACC. Then it was just a matter of watching the faster DHBC riders going even faster and faster round the track. The lead did get pulled back a bit by the end but the result never seemed in doubt. Thanks to the team, the cheer squad, LACC and the BFV. Definitely a highlight of raw for me.
Top 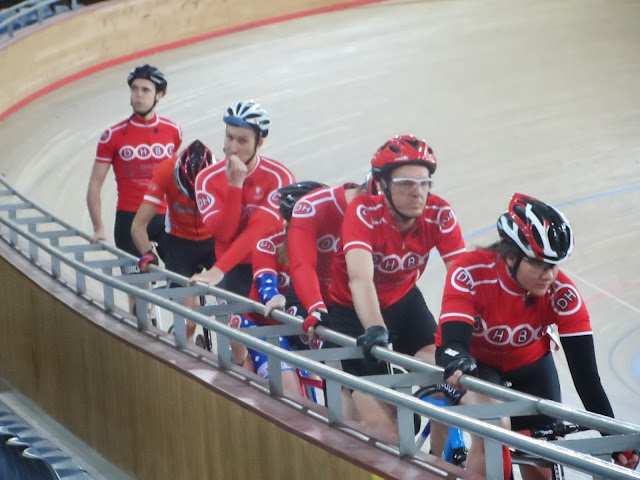 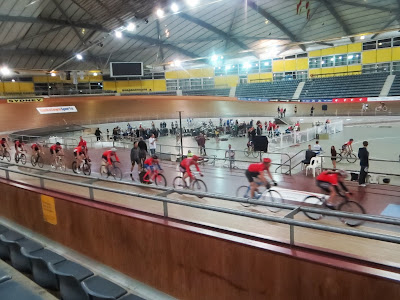 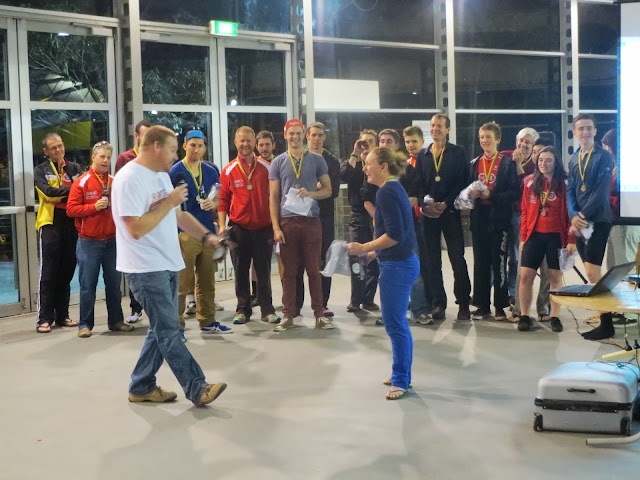 Terrific night. DHBC has had a Big Weekend. Here are some of our "Italians" waiting for the Off.

Thanks to Crafty and the Crew for RAW.
Top

Great reports, even yours BFV. Best you get some fence start practice next year.
Top

Some more photos from the night. Great result. The Pursuit was a delight to watch!
Top

Apart from DHBC's win in the Hillbrick team challenge we also had on the virtual RAW podium for the TWE point series:
3rd in Div 2 Eric Macdonald
4th in Div 3 James Orton
5th in Div 4 Troy Martin , and lastly messing up the nice mathematical progression,
1st in Div 5 Broughton Caley

Its been heaps of fun cheering on all the the DHBC riders each week and having a go myself on the boards for the first time. If you are thinking of joining in next year, I thoroughly recommend it. Thanks to the experienced riders for their tips and support.
Also a big thanks to Colin Williamson and Lizanne for encouraging so many juniors to get out to RAW this year. I can't wait for 2014!
John C
Top

Yeah - next year, DHBC Juniors should start their own club and take on Libcombe in the italian!

really enjoyed my first full season of RAW. I'll be back next yr for sure
Top
Post Reply
139 posts

Users browsing this forum: No registered users and 7 guests